“The following composer was brought to me in Living Color!”

Irwin Bazelon was one of the intense personalities that can brighten any project; a serious composer of 9 symphonies and 60 other orchestral works, (see his Wikipedia entry) who actually made his money in two different ways:

At UPA/New York, about 1955, I had the assignment to animate the original NBC color peacock logo. The peacock spread its tail as a spectrum of brilliant color. It needed a dramatic musical fanfare, and I picked Bud Bazelon to compose it. I personally got nothing beyond my UPA salary as creative director, but the musicians union had negotiated a contract which requires payment to composers each and every time their music was broadcast.  (We cartoonists were not so lucky. I wrote about how we missed out in my online book, “How To Succeed in Animation,” a failure which sighs an ironic note to that book’s title.)  Bud Bazelon became rich from his ten-second symphony, and he became my grateful friend to the end of his life for bringing him this bonanza.

My bonus came from what I learned from the problem of animating this 10 second film starring a spectrum spangled peacock. Naturally, NBC wanted a brilliant instant display of color, with the same dazzle as a 4th of July fireworks rocket. The problem was that no matter how we tried, we couldn’t get the needed brilliance from any colors painted on paper, even with the best paint on the best paper. We even tried fluorescent colors, but their effect vanished on Eastman color film and on test TV transmissions. Don’t forget, in the 1950s, when our efforts were made, the word “digital” referred only to our fingers, and a “computer” was a person who could count without relying on his fingers.

After many attempts, I thought of an old-fashioned analog idea. I went downtown to a theatrical supply house, and bought a complete set those heavy and intensely colored “gels” that are used to cover the powerful lights used in theaters. Even when shined onto a theater stage from a great distance, the colors remain strong. We drew our “peacock tail” segments on special intensely black heavy card stock paper, cut out the segments with sharp X-acto knives, and taped pieces of the various colored gels onto the backs to cover the openings.

We punched peg holes in heavy-grade cels and carefully taped them onto the black tail segment sheets with tail sections looking like stained glass windows! Using our previously pencil tested paper animation drawings as guides, we were assured of smooth movement. The light was of course from below; the same lights normally used for shooting pencil tests. Thus the intense colors of the gels were beamed directly onto the film emulsion. The equally extreme blackness of the cardstock allowed several passes, achieving overlaps without loss of color.

This is a simplified explanation. Anyone knowledgeable of the problems of pulling this off without the benefits of today’s digital scanning, will realize that the testing, and trial and error involved, waiting for film-lab results, exposure adjustments, etc. etc, etc. made this the longest ten seconds of our career! You can see the results on YouTube.  At the time the results shined.

Bud went on to create a rich musical contribution to the most important industrial film we produced at Terrytoons. It was DEPTH STUDY, a sales support film for our parent company, CBS Television, and another landmark film for us.

But this piece is also meant to tell you about Bud as a person, and as a composer who may yet be recognized as an important musical genius of the latter part of the 20th century.  I urge you to seek out his recordings.  If a genius composer is required to also be a twisted psychotic, Buddy also lived up to that requirement. In response to a request from a professor of music, I wrote the following letter, trying to figure out what made Irwin Bazelon’s metronome tick:

The Gaelic above does sound beautiful!  I can only provide you with a few impressions of my long friendship and early collaboration with Irwin (Bud) Bazelon.

I am trying desperately to remember exactly how Bud & I came into contact. It is possible that he simply showed up at our door sometime in the early 1950s. I was then Creative Director of UPA-New York, the commercial branch of the Hollywood-based United Productions of America animation studios. At that time we had built a reputation as an avant garde, (now they say “cutting edge”), studio, willing to take creative chances to widen the scope of film animation, and thus we did attract many high level designers, writers, and musicians, eager to collaborate with us in our attempt to create animation films of fresh artistic quality.

We also attracted a clientele wishing to realize advertising films above the run-of-the-mill standard.  One highly prestigious project we were offered was to animate the original NBC color television peacock, which has become the permanent NBC trademark, still today.  (If you have access to the NBC-Super Channel on satellite TV in Europe, you will see the current version of this color peacock constantly on screen.)

In the early 50s, color TV was new, and it was important for NBC to place this ten-second film before each program to be transmitted in color.  As composers are paid royalties for each and every broadcast of their music, this was an obvious goldmine.  (I myself, as director of the film, received no royalties at all, as I was a well-paid salaried UPA employee, and everything I did belonged to the company.  In those days, only actors and music composers rated continuous royalties.)

In any case, when I heard Buddy’s musical samples, I felt he would be the perfect composer for this tiny film.  All it consisted of was the peacock’s tail opening to a fan of rainbow-spectrum colors, with an announcer’s voice saying: “The following program is in Living Color on NBC.”  Well, Buddy composed the little signature melody for this, and as I recall, he had a large, steady income from it for many years.

I hadn’t realized it, but I had given Buddy his very first commercial job, and a spectacularly good one.   Later, when I moved on to become Creative Director of CBS-Terrytoons, a large animation studio bought by the rival CBS-TV network, I was able to give him another major assignment on a long CBS promotional film.

So we became close friends.  I had great respect for Bud’s music, but it was too “far out” at the time for most of the commericial and gag-cartoon productions we had to do.  I did what I could to recommend him to others, but we didn’t have any further opportunities to work together.

What I remember of him as a personality was that the more I knew him, the more weird he seemed to become.  Bud was not exactly a shrinking violet, and he came on stronger and stronger as an egocentric.   I always assumed that this was due to the struggle any advanced musician has to gain recognition, acceptance, and financial success.

When I once asked him how he managed to get along, and especially how he and Cecile were able to maintain such a choice, upper East side Manhattan apartment – (That was always a mystery to me!) – he blandly told me that he made his living by playing the horses! I thought he was kidding, but later understood that he really was a regular bettor on horse racing!

One thing that disturbed me and my wife whenever we visited the Bazelons was how sharply and demeaningly he spoke to Cecile.  Even when she was right in the room he would make extremely deriding remarks about her.

She didn’t seem to be overtly bothered by this, but we couldn’t know what she really felt.  Perhaps she too just understood this as part of his hostility at not being recognized as the greatest musical genius in the cosmos.  He was great, but inevitably he was not quite as great as he seemed to think he was.  As the years went by, it became difficult to talk with Bud about anything other than himself.  Whatever we were discussing, he would just switch to his self-praise.

With all this, you may think I disliked him.  The fact is that there was a lot about Bud that one could not help but like and admire.  His demeanor was so over-the-top that we accepted it as just part of his charm.

I have no idea whether or not he really was a great, winning horse-player, or whether or not he really respected Cecile as an artist or person.  Outwardly, one would get the impression that he was intensely jealous of her success and acceptance as a painter.  But Bud did gain respect for his music. He did get concerts, and he was recorded, etc., but apparently it was not enough acceptance to satisfy him.  If it was, he would not have had to resort so constantly to blowing his own horn in apparent compensation.

In spite of the fact that we loved him, it did become more and more of a trial to be with him, and that was a great pity.  There were many great composers in history with personality problems.  We don’t have to reject Wagner, Strauss, Mozart, or Mahler because they may have been twisted psychologically.  With composers it is the music they create which either dies with them or lives on.   Time will tell, but Irwin Bazelon’s music surely has a chance of living on, and perhaps supporting everything Buddy said about himself!

Professor Cox, I am not a musician, but in my 50 years of film work I have worked with many, always endeavoring to choose the best one available for each specific project.

I cannot supply you with any technical musical insight to Buddy’s music, only that I recognized a resonance and a fresh vitality that would work for the projects I had to do.  I love all good music, as a listener and concert-goer, but I am not a performer.   In my youth I was primarily a lover of traditional jazz. I still love jazz, and consider it our greatest American contribution to musical culture.  There was a spirit of jazz in Bud’s work that stirred me.  I have my own talents, but my greatest personal emptiness is that I cannot sing nor play any instrument.

I must seek my musical fulfillment in listening, and in collaborating with real musicians on the soundtracks of my films.   Bud was one of the most exiting!

With my best personal regards, 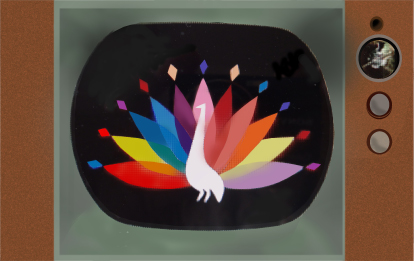 Our UPA original NBC color peacock logo, achieved with backlit colored gels and multiple exposure. About 1955. Also about this time we did the animated openings for the BBC Omnibus TV show, with Alistair Cooke. We did two versions, one for a second season of the show. I was very proud of the graphics, complicated effects made entirely under the camera in that pre-digital age! I hope you can find them on YouTube!

This site uses Akismet to reduce spam. Learn how your comment data is processed.